Dinkie Die  is a performance-installation in a vacant shop window in Reservoir, Naarm.

Created by Delia Poon in collaboration with Melinda Hetzel & Co as one of 15 artworks in 15 shopfronts by local artists, as part of Made in Rezza and FUSE Darebin Autumn 2022.

Dinkie Die is an installation that draws on real and imagined narratives of artist, Delia Poon's, post-war home. Inspired by objects that were left behind by the elderly and now deceased owner, Delia explores her own family narrative and that of her predecessor, as imagined from his personal effects and ephemera. Dinkie Die investigates themes of race and gender, exploring what it is to be Australian in 2022, and how this has evolved across the shifting histories and changing populations of Reservoir.
Location:
224B Broadway, Reservoir VIC 3073 map

Access:
CONTENT: The audio presents themes of racial and gender-based injustice.
Captioning available in English or simplified Chinese on your mobile device via QR code on site.
​If attending one of the performances, you can preload the captioned video at home here. (Duration: 16 minutes).
Both the performance and installation are viewed from outdoors, through the shop window. There is no audience interaction.
Limited seating is available on the bench at the bus stop, directly outside the venue.
Accessible parking is available directly opposite in the parking bays in the centre of the road.
The viewing area is a level surface and can be accessed via ramp from the accessible parking.
There is loud background noise from passing buses and traffic.
There are no toilet facilities at the venue.
There are cafes and bars nearby.

Free. Come past any time.

Delia Poon - Bio
​Delia Poon is a musician, composer and interdisciplinary artist of Chinese-Australian heritage, based in Reservoir, Naarm. While she has lived and worked in Darebin for almost twenty years, she grew up in the regional Victorian town of Horsham, where she began piano studies at an early age. Completing a music degree with a major in Feminist Musicology, Delia has worked professionally across Melbourne’s music scene as an instrumentalist (vocals/ piano/ double bass) in various bands and orchestras. Further she has worked as a sound designer and composer as well as a music educator.  Delia Poon and Melinda Hetzel first collaborated together in 2006 on Mysteries of the Convent with Peepshow Inc, with return sold out seasons in 2007 and 2008 at the Abbotsford Convent as part of Melbourne Fringe. 'Dinkie Die' is their most recent collaboration.

The City of Darebin proudly supports Dinkie Die which premieres as part of Made in Rezza and the Autumn 2022 FUSE Festival. 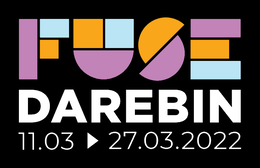